The male bluebird finally went all the way into the nest box today. These trailcam images don't show that moment, but show there has been a lot of activity there since last night. The last image shows the male with something in his mouth. To feed hatchlings? The last two images show a visit by a magpie yesterday and another nocturnal visit by a cat last night. Hopefully the hole is small enough and the box is secure enough to keep them out. 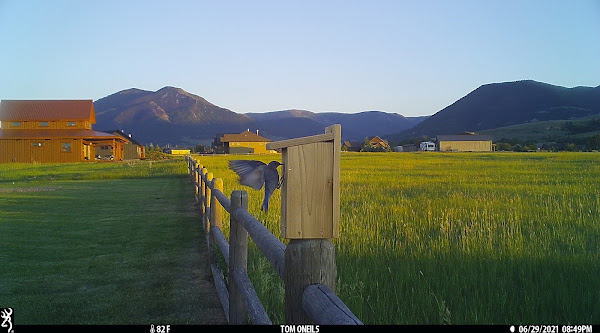 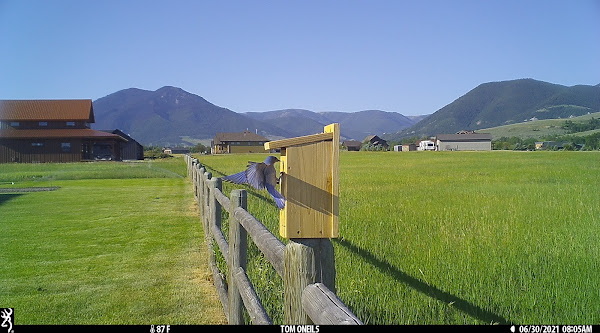 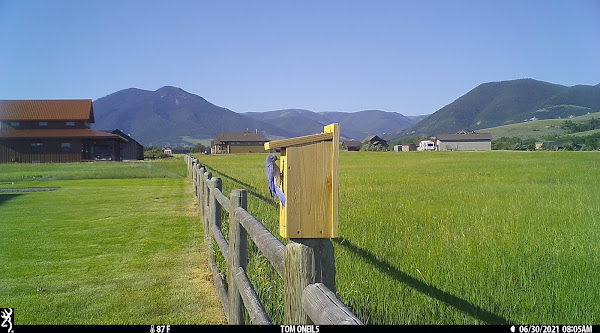 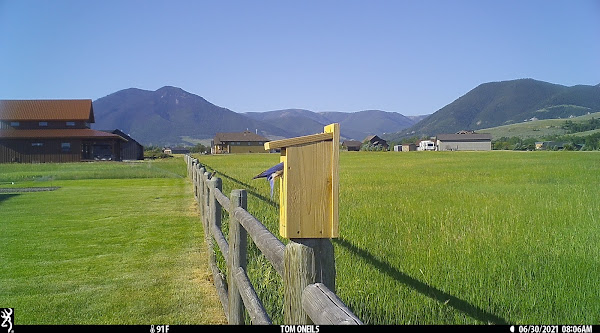 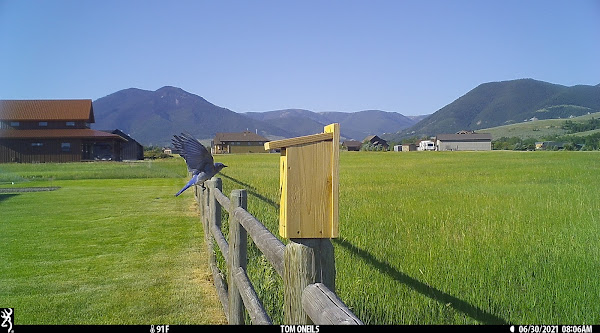 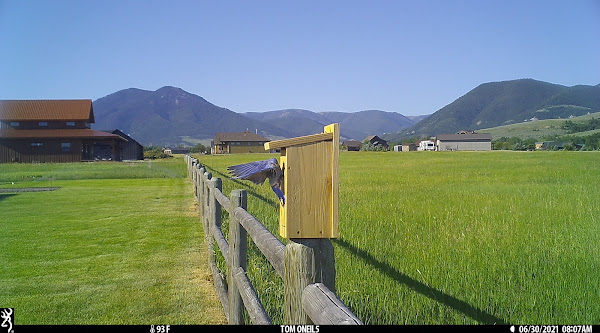 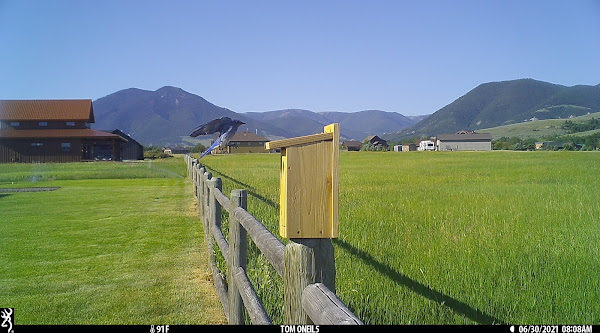 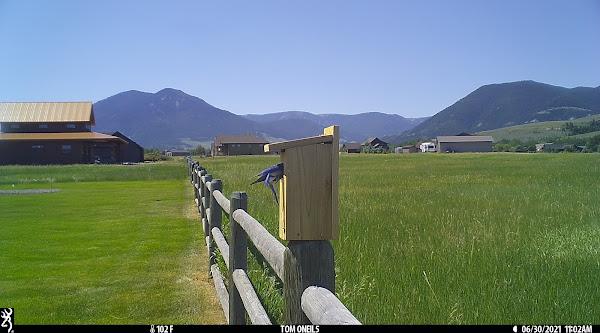 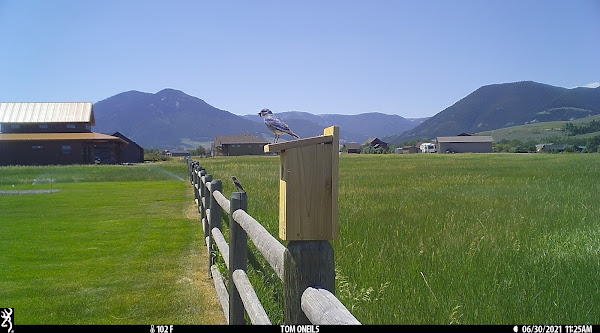 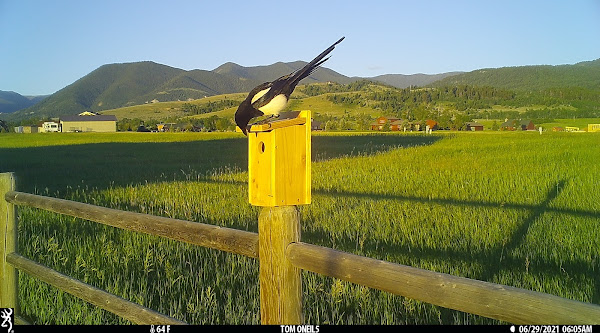 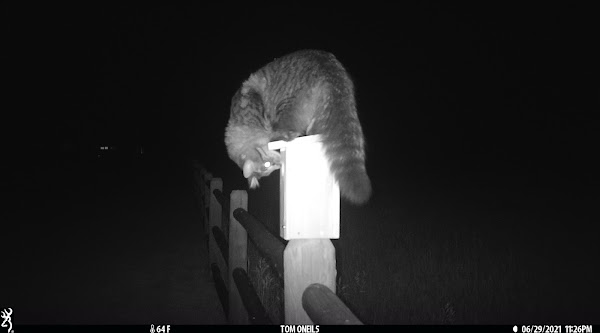 I saw a hummingbird in the yard a few days ago so decided to dig out the neglected hummingbird feeder and see what I could attract. And of course I set up a trailcam to monitor the action. I used my melted Browning, aka #6, and it did what it does best -- take thousands of images of the slightest motion and occasionally capture something of interest. In a little over 24 hours it fired off 10,584 times as the pole holding the feeder and a flower basket waved back and forth in the wind.

But I did get 113 hummingbird images in 10 sequences. The images are nothing special, except they prove at least one hummingbird has found the feeder. In this way, melted Browning #6 has served its purpose as a scout camera even though it sucks as a maker of fine images. I did dial back the reset time so it may not fire off quite as often, but I still expect to be clicking through thousands of images if I keep monitoring the feeder. If I mounted the feeder so it did not sway back back forth, I wonder if the little birds would set off the motion detector. For now I'm throwing thousands of images at the wall and getting 1% of them to stick. When I have time (which is most of the time in retirement), I'll set up the DSLR and try to get some real images. 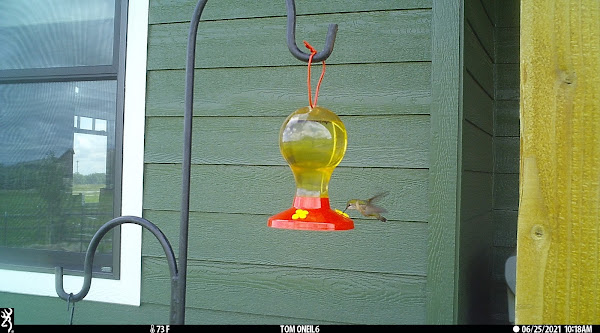 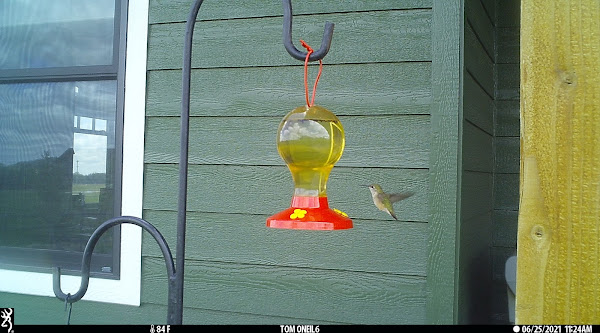 Sunday: This is the best so far using remote triggering, Canon M100 with 70-200 lens and built-in flash, triggered from a phone app. The feeder I have is old, ugly and full of ants, so I have ordered a new pretty one with an ant guard. 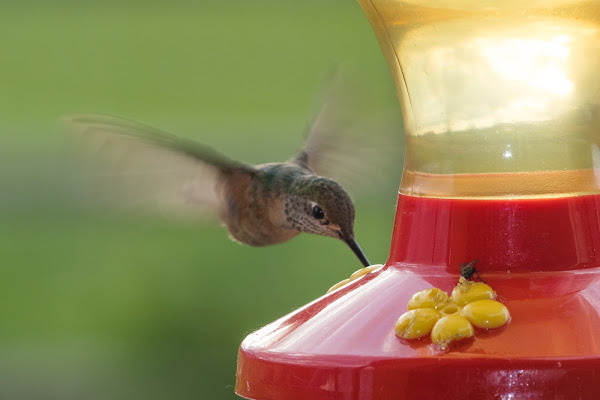 Monday: Canon 5D Mark III, 100mm macro lens, Speedlite 380EX flash, 1/250 at f4, ISO 200. Zone focusing, remotely triggered, hope to get lucky. I will boost ISO and try to get some more shutter speed. Hope to get the nicer-looking feeder in a few days. Obviously the Speedlite on the 5D is more powerful than the little flash built into the M100. 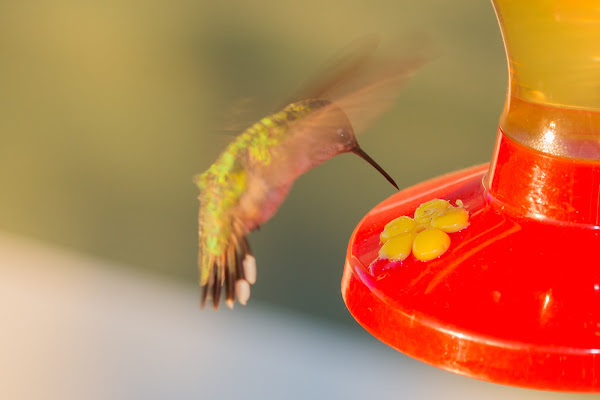 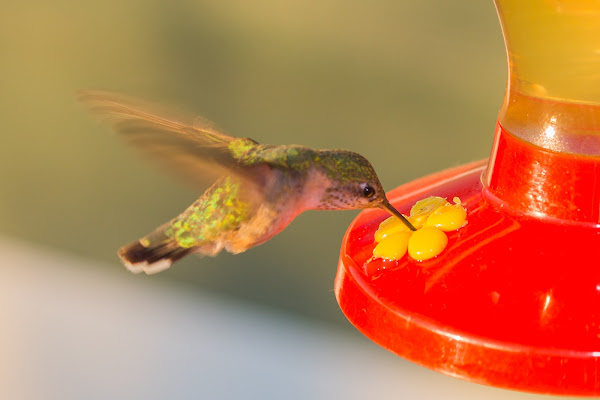 One of my pet peeves is the inferior image quality of trailcams. Most manufacturers take 3mp or 5mp images, interpolate them up to 30mp or beyond, apply heavy-handed sharpening, and call the result "high resolution." (Even the cheapest cell phones have 12mp sensors now, but trailcams seem to be stuck at 5mp. C'mon man!) But converting a "real" camera to a trailcam replacement is hideously expensive and difficult. Recently I came across a partial solution that enables motion detection on many Canon DSLRs, including my 5D Mark III, a program called Magic Lantern. The program is primarily aimed at the specialized needs of videographers, but there are some features for still photographers, including motion detection. Canon could provide this capability if they chose to, but they don't because... no one knows why.

Magic Lantern is not perfect:

I don't have any actual images to prove it yet, but I was able to get the 5D firmware downgraded, install the program, and run some tests. Now, weather permitting, I will use it to get some candids of the bluebird box in my yard. But today it is raining. Maybe tomorrow.

Tuesday: Perhaps the bluebirds are too small to set off the motion detector. I also have the 5D connected to a wireless remote and have been able to get some shots, but I don't think I've gotten any Magic Lantern-triggered images except for test shots with my giant white hand waving around in front of the lens. Below is one of the better wireless-triggered 5D shots, followed by Browning trailcam images, the first from the non-melted one and the second (proving it still works) from the melted one.

Saturday: Although tests indicate Magic Lantern motion detection might work under some specific circumstances, it hasn't worked for me with the bluebird box. Everything I've gotten has been triggered by me using wireless, not by the program. The camera was acting sort of sluggish with the program running, so I removed it and re-installed the latest firmware, which seemed to fix that problem. The next option seems to be shelling out a few dollars (or pounds sterling) for an external trigger. 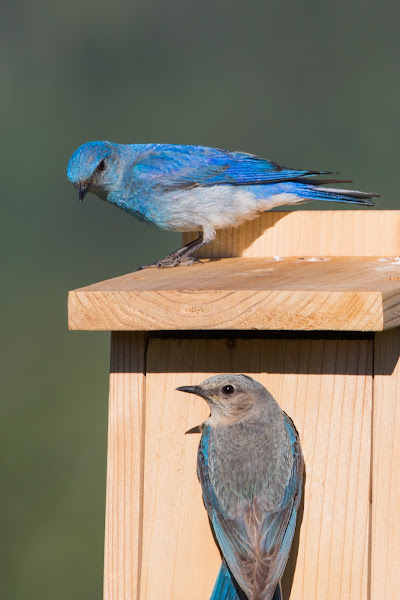 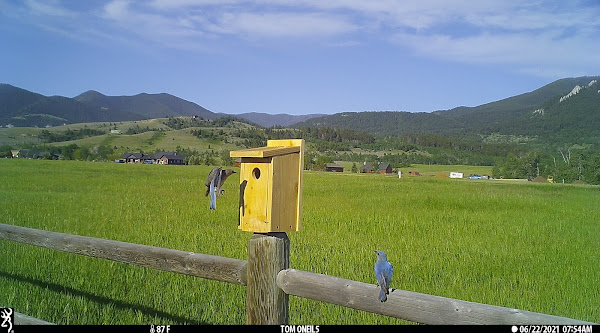 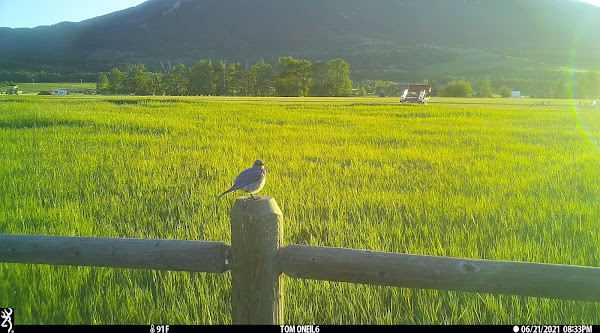 No bluebirds have taken up residence yet, so I made the hole slightly larger yesterday. It continues to draw lookers, but also draws potential predators. A magpie was an early-morning visitor today, but didn't find anything. 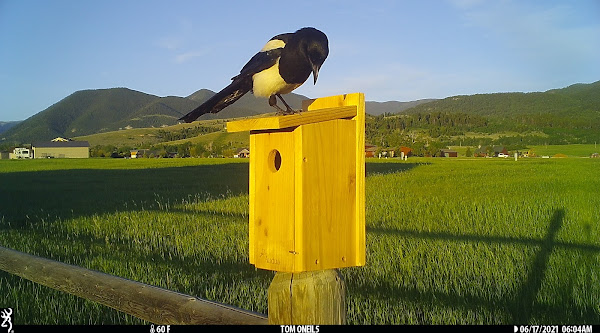 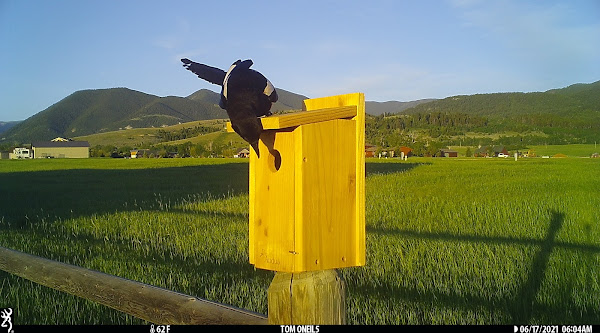 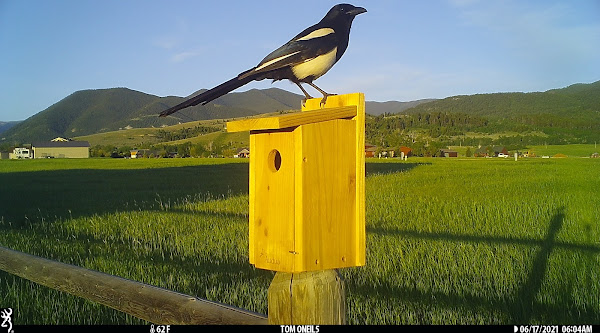 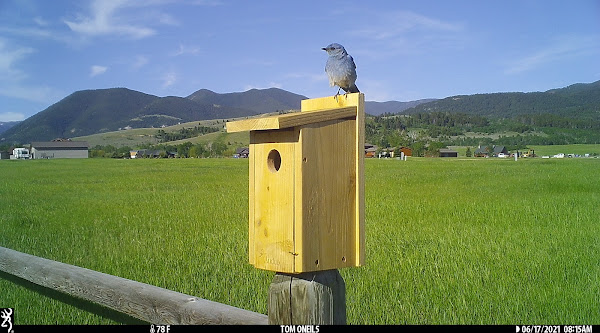 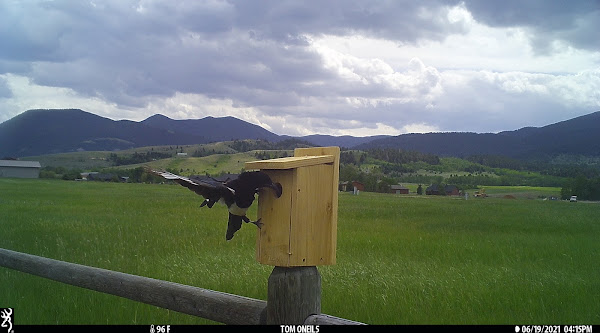 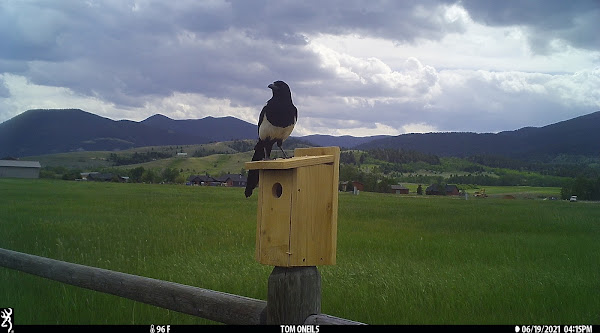 I haven't had any trailcams in the wild lately. The two Reconyx get some work monitoring my yard, but the remainder of my functional cameras have been sitting in a box for a while. I need to find somewhere in the Montana wilderness to put them. But we do have bluebirds in the yard, and I put the non-melted Browning back into service to monitor a new nest box I recently installed. The bluebirds haven't moved in yet, but they are thinking about it.

For more backyard wildlife images, including both trailcam and DSLR, click here. 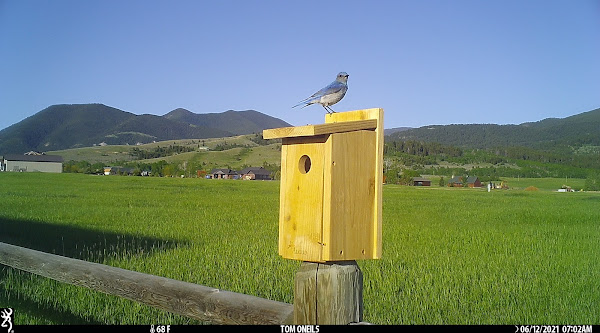 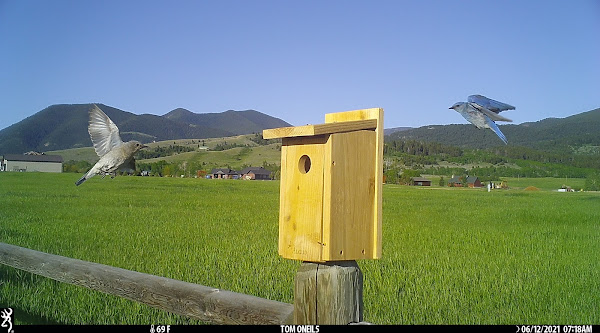 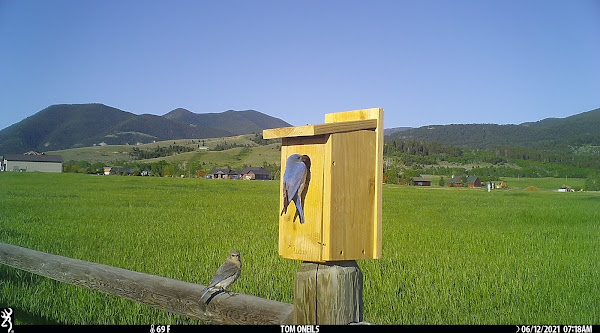 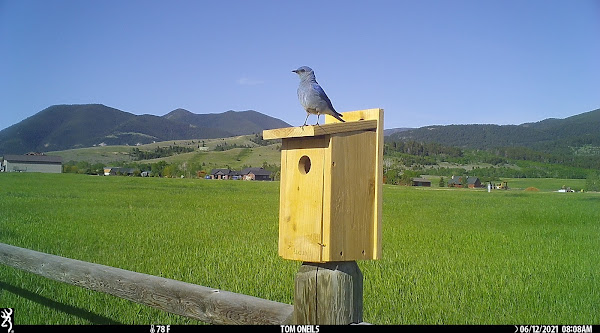 Update, one week later: I tried using the newest Reconyx on the nest box, but the small birds apparently weren't enough to trigger it. So I reinstated the Browning, and I even put out my melted Browning aimed at a nearby fencepost. It looks like crap, but it still works and is taped up to be somewhat waterproof.