Since 2011 my trailcam updates tended to follow a pattern. Every six months in the spring and fall I would post pictures of elk and other critters my trailcams had captured. Going into this update I had already decided to pull my cameras out of the Highland Ridge area of Wind Cave National Park where they had been for most of the past six years, but nature decided to put an exclamation point on it.

As I pulled into the Black Hills the afternoon of the 13th, the air was heavy with smoke from burning slash piles. The recent snow made it a safe time to burn the piles. However, the smoke was an unwelcome reminder to residents of a very unsafe fire about two months before, the Legion Lake fire which burned 54,000 acres of Custer State Park, Wind Cave NP, and private land east of the parks. The fire, the third-largest in the Black Hills since the arrival of non-natives, was started by a tree falling on a Black Hills Corp power line.

(In the 15 years my Dad, Jerry O'Neil, was the Black Hills Corp Forester and in charge of keeping trees out of power lines, the company was not blamed for any massive forest fires. Nor in the five years he was Assistant State Forester for South Dakota Game, Fish and Parks overseeing Custer State Park did he let half of the park burn. Just thought I would point that out.)

Thanks to my transition to a 4WD vehicle in mid-2017, I was able to navigate through the snowdrifts on Highland Ridge Road to my usual parking area. There were plenty of bare spots among the snow to make the hike down only slightly more challenging than usual. On the way down and as I approached the location of the new Browning camera, it was obvious that the fire had gotten down this far. There was no camera on the tree where it was supposed to be, but I quickly spotted it sticking out of the snow. There was only a small charred remain of the nylon strap that had held the camera to the tree. The camera case was melted in a couple of spots. I was able to open it, turn the switch to off, and stick it in my pack.

Then I went in search of my Reconyx further down the hill. I found it where it was supposed to be, secured to the tree by a MasterLock cable. However, I couldn't get the camera off the tree because some of the plastic sheath on the metal cable had been charred and distorted. It looked as though the fire charred the south side of the tree, but not the north side where the camera was mounted. Weird. I whittled the sheath off the cable with my handy Leatherman and eventually was able to pull the cable through the locking mechanism and free it from the tree. I hiked back up the hill in the hour before sunset and headed to the hotel in Custer.

The Reconyx camera and memory card seem to have survived without significant damage in the fire. (Update: There was some bubbling on the plastic over the infrared sensor. Since that might affect the detection sensitivity, and because Reconyx seems to be the only trailcam company that actually services its products, I sent it in for repair.) The images in the slide show (link below) are from that camera. The Browning was more severely damaged. After a few anxious moments I was able to recover the images from the memory card, but the card filled up with a bunch of false triggers and contained no images of the fire. There was one usable sequence of an elk, and that was it. (Another Update: The Browning's case is warped, so the battery compartment and SD slot are tight while the latch is very loose. I tested the batteries, replacing two of the six, and the camera detected motion and took pictures. It looked as though the seal across the top was compromised so I covered it with electrical tape. It's ugly but, for now, it works. I'm going to change the camera name to Quasimodo.)

Today I headed to the location of my third camera, the Moultrie, in Custer State Park. The location was 9.5 miles north of the other two but close to where the fire started. When I got to the area near the Badger Clark Memorial, it was obvious that the fire had been through there. There were a lot of trees down in the area where the camera was and it took a while to figure out from my GPS where I should be looking. I didn't find anything. Like the Browning, the Moultrie was secured only by a nylon strap and I'm guessing it burned away. The ground was covered with snow and I dug through it for some distance from the marked location, finding no melted hunks of green plastic. In a few months when the snow is gone I will look again. I'm sure the camera was trashed but I would be happy to be able to get something off that memory card.

I'm not sure what my next trailcam project is. As of now my only operational cameras are the idle Reconyx and another Browning at my brother's cabin in Montana. I've been trying to figure out ways to use trailcams in Conata Basin prairie dog towns to get burrowing owls, badgers and ferrets, but with no handy trees I have to decide on a mounting system. And I have to figure out what replacement cameras to get. In my short time with the Browning Strike Force HD Pro, I was underwhelmed by the oversharpened images and weird aspect ratio of 9:5, which is too wide IMO. I prefer to make my own sharpening decisions and try to stick with a 3:2 aspect ratio for DSLR images. The Reconyx images are even more square at 4:3. Lately I've been sizing all horizontal images at 1,800 pixels wide, so this means the Browning images are 1,000 pixels high, my standard images are 1,200 pixels high, and the Reconyx images are 1,350 pixels high. I don't crop trailcam images so the aspect ratio makes a noticeable difference.

Here is the link to the fire images from the Reconyx, the elk images salvaged from the Browning, and some miscellaneous images from my trip through northern Nebraska and western South Dakota. As you go through the fire slides, note the time stamp and how quickly the fire is spreading. Winds of 35 mph were responsible for the quick advance of the fire. 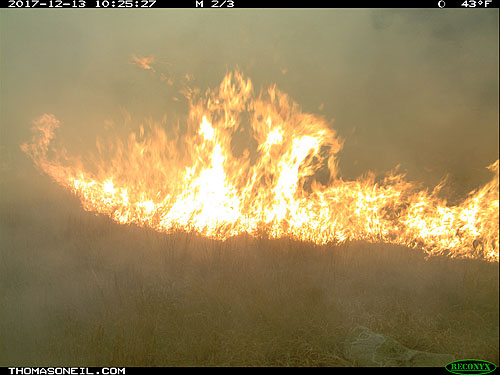 Since I won't be using this location again any time soon, I can now reveal that since 2012 my cameras were at the bottom of this hill in Wind Cave National Park, latitude 43.609558, longitude -103.397058. In 2011-12, the Reconyx was located across the road, which would be to the right in this image. Notice most of the trees are still standing, but some of them have turned brown from the fire and probably will die. Hopefully next spring or summer these slopes will be green with new grasses. 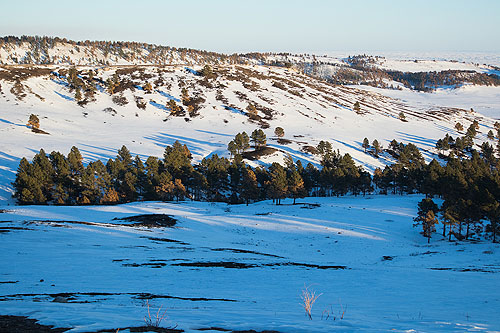 My (former) trailcam site
Posted by Tom O'Neil at 8:00 PM