Last year I bought two Browning Strike Force HD Pro trailcams. This particular model is favorably reviewed on Trailcampro and Amazon, but I just can't go along with the crowd on this one. It will be a while before I buy another Browning. Specific deficiencies are:

On a positive note, the camera I had in the Black Hills survived a forest fire. The case is warped in some spots but the camera still works. However, because the camera had thousands of false triggers in the days before the fire, the memory card was full and it got no images of the fire. As of now both Brownings are undeployed while the two Reconyx do Montana duty. I'll probably be putting the Brownings out in the Badlands or Black Hills within the next month, hopefully finding spots where there isn't waving grass to set off the false triggers.

I will be posting 11 images from the Montana camera separately, but for review purposes here are some images that illustrate my points. Click on an image to see a larger version. 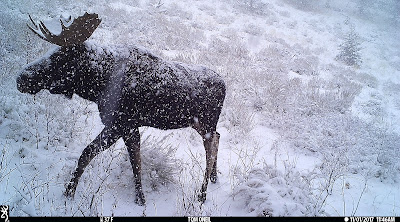 This shows the color vignetting. On the moose images I photoshopped, I desaturated the color on the edges to reduce the blue. On this one the moose was too close to the edge of the image. 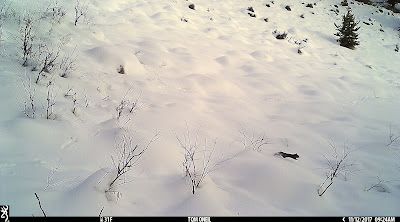 One benefit of having thousands of false triggers is you get something that you might not get otherwise. 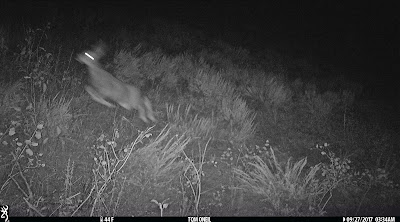 This illustrates (a) deer are leapers and (b) the Browning's nighttime blur reduction is not very effective. 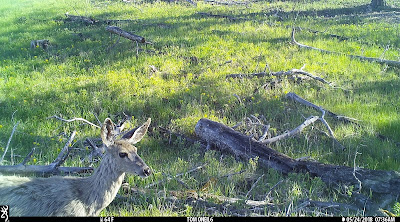 The Black Hills Browning, despite being damaged in the fire, can still take a good image (mixed in among the hundreds of false triggers). 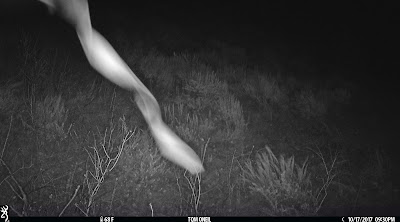 This one is my fault. When strapping a camera to a tree, make sure you secure the loose ends of the strap.