Where are we today?

For the first time in seven years, I do not have a trail camera deployed in the Black Hills of South Dakota. The massive Legion Lake fire of December 2017 put a damper on things, although even before the fire I was planning to pull my three cameras from their locations in Wind Cave National Park and Custer State Park and move them elsewhere, probably in the Jewel Cave National Monument area west of Custer. I also am trying to figure out the best way to deploy cameras in Conata Basin prairie dog towns south of the Badlands to capture burrowing owls, black-footed ferrets, and badgers. 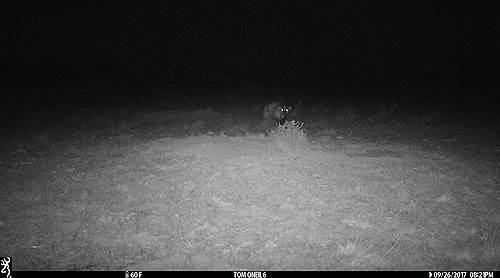 When I did my trailcam check in February, I discovered that the Reconyx PC900 and Browning Strike Force HD Pro were damaged in the fire and the Moultrie M-880 was missing. The Reconyx still seemed fully operational and I considered putting it in the new location, but there was too much snow on the National Forest Service roads even for a 4WD F150. When I got home and did a more thorough inspection of the Reconyx, I saw that the plastic over the PIR sensor was bubbled so I decided to send it in for servicing. As far as I know, Reconyx is the only trailcam company that actually services its products. I believe all the others give you a replacement if covered by warranty or "SOL" if not. The Browning case was more severely melted and warped than the Reconyx, but all I'm going to do with that is use electrical tape to try to keep the water out of the gaps that the fire created. When I searched for the Moultrie earlier this month, the ground was covered with snow and I couldn't find it. I'm presuming the fire burned through the strap and somehow deposited it some distance from the tree. The other possibility is it was stolen. BTW this really was a massive fire, 54,000 acres. The Moultrie was located 9.5 miles away from the other two, but all three were in the burn area.

Since the Conata Basin doesn't have many trees, I need some sort of mounting solution. A recent purchase includes a Fourth Arrow Stake, a trailcam support that drives into the ground like a stake and extends to 40 inches. One thing I'm wondering about this is whether it is designed to be left out for six months at a time. If that doesn't work I still have the T-post attachment that I bought at Cabela's. I even bought a T-post at Home Depot in case there isn't a fence in the appropriate location. Update: After some testing with my crappy Primos, I think my impression of the Arrow Stake is correct. It seems to be a good short-term solution but I wouldn't put it out for months at a time.

This is the current plan, a three-day trip sometime in April or May after the snow is long gone and the ground has firmed up a bit:

The Primos only gets short-term deployments because it has horrendous problems with false triggers and daytime image quality. I don't want to waste lithium batteries on it. With a two-day deployment on rechargeable batteries, my hope is to get some good nighttime images or videos of badgers or ferrets. If that works, I'll put a camera at that location, either a new camera or my 2nd Browning Strike Force HD Pro which is currently at my brother's cabin in Montana.

As far a new camera for the Conata Basin, I am still extremely undecided. For $500+ I can get a 2nd Reconyx, but in the open space of the basin versus the sheltered forest of Wind Cave NP, theft is a real concern. A third Browning is out of the question as I'm underwhelmed by the image quality. There is no user control over sharpening as there is with the Reconyx, and despite Trailcampro's glowing review I think the images are oversharpened. To me the images look like something from 1999 when I was just learning to use an image editor and thought that the more sharpening, the better.

An intriguing trailcam I came across recently is the Exodus Lift II from a small company in Ohio. Its warranty is unique, 5 years with a 50% credit toward purchase of a new camera if it is stolen or gets caught in a forest fire. Customer support seems to be very good. Image quality seems to be quite good, although it is difficult to find full-size samples. If anything, the images seem to be a bit dark much of the time. After seeing the blown-out crap that the cheap Primos produces, that's not the worst thing. The other downside is the price, which at $229 is 50% higher than the mainstream cameras from the big manufacturers. The question is whether the personalized support, good warranty and the supposed high quality are worth it.

Another option which I have considered but haven't pursued is a camera trap using a "real" camera in a case, a PIR trigger, and probably an external flash. If you see a color image in National Geographic of a leopard at night, that was probably taken with a DSLR in a box. The problem with that is I live 300-400 miles away from my target areas and only check the cameras every six months. Batteries for a DSLR camera and external flash would not last that long without some sort of solar setup, and the possibility of theft would be even higher.

As far as mainstream trailcams go, I seem to be coming back around to Bushnell. The simplest solution would be to decide on a model in the $150 range and go with it.