As I have stated in other posts, my Moultrie M-880 trailcam is missing. It was last seen in Custer State Park in the Badger Clark Road area in November 2017, an area subsequently burned by the Legion Lake Fire a month later.

Since the area is easier to get to than my Wind Cave site 9.5 miles away, I checked the Moultrie on Nov. 18 on a drive back from Denver. This is one of the last images it got: 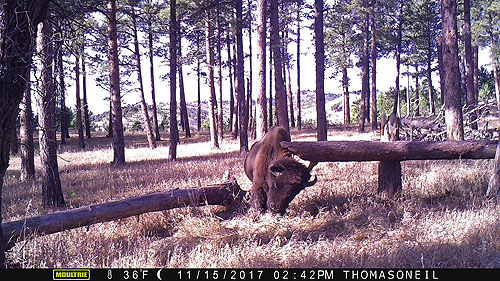 Earlier this month I spent quite a while digging through the snow trying to find it, to no avail. I will return when the snow is gone. Best case is I find it, it may or may not be functional, but the memory card is intact and I have some more images of the fire. Medium case is I find it but the memory card is useless. Worst case is some a-hole stole it.

That's one of the risks of putting out trailcams, and one which I haven't had to deal with at my location in Wind Cave NP, which was at the bottom of a fairly steep hill. In fact, one of the problems I had there more than once was ME finding the cameras. Last year when the Moultrie was still there, I had to move it to a smaller tree when the strap broke. Even though it was only maybe 25 yards away, I had trouble finding it the next time because I didn't mark the new location on GPS accurately. Despite the remote location, hikers showed up in the shots twice in seven years at that site. I think the location in Custer SP is much more susceptible to foot traffic so maybe some mouth breather found it before the fire.

A word about Masterlock cable locks: My first one had a 3/16ths-inch cable. After being outside for a few years, the lock seized up and would not turn and I ended up breaking off the key in the lock. In about 20 minutes I was able to cut the cable with a Leatherman tool using the file and wire cutter. I then bought a thicker 5/16ths-inch Masterlock to secure the Reconyx. I was able to unlock it after the recent fire, but I couldn't pull the cable through the lock because the fire had charred and melted the insulation. After not making much progress cutting through the cable with the Leatherman and a small hacksaw, I whittled the charred insulation off the cable with a knife and was able to pull it through. So in my experience the thicker cable is much better. But some jerk with a bolt cutter would make short work of either. Update: Just bought a $12 bolt cutter with 18-inch handles. It didn't cut through the 5/16ths-inch cable on the first try. But I repositioned and popped it easily on the 2nd try. Like I said, it may discourage casual thieves.